The Aether Wiki: Genesis of the Void
Register
Don't have an account?
Sign In
Advertisement
in: Update 1.02, Gliding mobs, Ground-based mobs,
and 8 more

Aerbunnies are passive mobs, found only in the Aether.

Aerbunnies spawn on Aether Grass with a light level of at least nine. Their model is similar to the bunny model from DrZhark's Mo' creatures mod.

Aerbunnies can jump up to two blocks in height, but typically only jump one block up. They move quite randomly, either circling about in a small radius or wandering off to some area in the distance.

When right-clicked on, an Aerbunny will appear on the player's head. It will stay there until the player right-clicks on it again or until it dies. Right-clicking will stop them from riding your head (including opening doors, shooting darts, crafting, or anything else that requires right-clicking). With one on their head, the player will not take any fall damage.

Issues relating to Aerbunny mob are maintained on the bug tracker. Report issues for Aerbunny there. 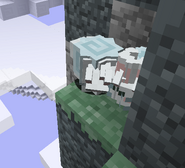 Aerbunnies crowded on a ledge