The Aether Wiki: Genesis of the Void
Register
Don't have an account?
Sign In
Advertisement
in: Aether, Aether II, Structures, Environment

This page is about the structure. For the actual portal block associated with it, see Aether Portal.

An Aether Portal is a special structure that allows a player to go to the Aether by walking through the blue swirls.

Aether Portals are made by creating a five by four frame out of Glowstone blocks and then pouring a Bucket of Water inside the frame. This activates the portal and creates the blue swirls.

Aether Portals are designed to look like the opposite of Nether Portals. Instead of the dark Obsidian block, the frame of an Aether Portal is built using bright Glowstone blocks. To activate the portal the player must use a Bucket of Water at the bottom of the portal frame, the same way one would use Flint and Steel to activate a Nether Portal. 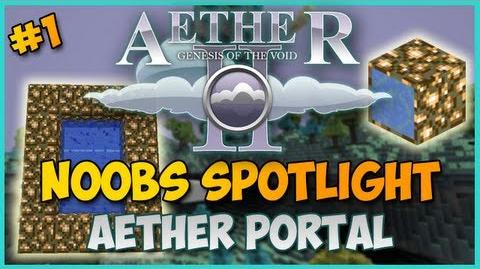 A bug where a portal generates in a Gold Dungeon in the Aether I
Community content is available under CC-BY-SA unless otherwise noted.
Advertisement