The Aether Wiki: Genesis of the Void
Register
Don't have an account?
Sign In
Advertisement
in: Pages needing revision, Blocks, Stackable,
and 5 more

This page is incomplete. The reason given is: Missing Gravitite breaking time
Please help to improve the page, or discuss the issue on the talk page.
Please remove this template once the reason is no longer valid.

“Found in Holystone. Freezes water around it on placement”
—Book of Lore

Icestone is a type of uncommon block found in the Aether.

It requires at least a Stone Pickaxe or Holystone Pickaxe higher to be obtained, and so, will drop nothing if mined with bare hands or a Skyroot Pickaxe.

Icestone can be found naturally generated in uncommon and small veins on the sides and undersides of islands. Icestone currently spawns in small veins of five or six, but can commonly spawn in small veins of one or two blocks. Sometimes, and this is really rare, it can spawn in veins containing up to 10.

In 1.10[upcoming], Icestone's block form is now replaced by Icestone Ore, which is somewhat more common than Icestone as a block.

Icestone's primary function is freezing any water or lava in a 7x7 radius from the placed center, respectively freezing into Ice and Obsidian blocks. Icestone Slabs, Stairs, and Walls do not freeze water and lava.

As of the current version of Aether II, the Freezer was completely removed, limiting Icestone's functional uses of freezing water and lava.

Issues relating to Icestone block are maintained on the bug tracker. Report issues for Icestone there. 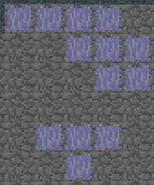 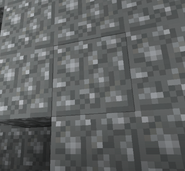 A vein of Icestone from Aether I 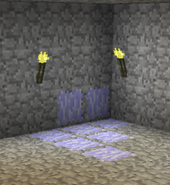 Icestone that has appeared when there was none there.

Icestone appeared on a Island bridge that was made out of Holystone only.

2 more patches of Icestone that appeared. 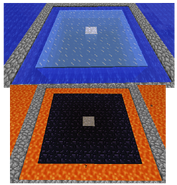 The freezing range for both water and lava, which is a 7x7 area or 49 blocks total
Community content is available under CC-BY-SA unless otherwise noted.
Advertisement