The Aether Wiki: Genesis of the Void
Register
Don't have an account?
Sign In
Advertisement
in: Feature

This article is about features that were mentioned by Gilded Games developers. For features that are currently planned, see Planned versions.

Since the very beginning of the Aether mod, there have been multiple features that were mentioned by the Aether development team. Said features are either currently planned for a future update but have not appeared yet, or have simply been dropped or forgotten about.

Aether Narwhals were hinted at to be a possibility in The Aether II mod, and would function similarly to Aerwhales.[1]

Aether Squirrels were a planned mob for The Aether II mod, and not much is known about them besides the concept art.[2] They were much larger than the player, and had glowing cyan markings on their foreheads, wrists, back, and tail. It is currently unknown if it will be implemented in the future.

Aether Warriors were a planned humanoid mob for The Aether II and would be new melee type Valkyrie mob.[3] Not much is known about them other than their appearance and supposed properties if being a melee type mob. It is currently unknown if it will be implemented in the future.

Blastbunnies were a planned animal mob for The Aether II and were related to Aerbunnies.[4] They would act as leaders of herds of Aerbunnies. Killing a Blastbunny would cause the Aerbunnies to make themselves completely defenseless, and not run away unlike their normal behavior when attacked. Blastbunnies would have the ability to jump very high into the air, and fly about in the air.

Their AI behavior would be very aggressive, attacking any players that attempts to attack them or their Aerbunny herd. Their means of attack would be similar to a Zephyr by lifting the player high into the air and causing fall damage. It is currently unknown if it will be implemented in the future.

Mothwols were a planned owl-like mob for The Aether II mod, and not much is known about them besides the concept art.[5][6] They were small owls with glowing cyan stripes, glowing cyan eyes, glowing cyan leaf-like ears, and a white head and black body with a long tapered tail.

Nether Warriors were a planned mob for The Aether II and would be new melee type mob found in Nether The Nether as their name implies.[7] Not much is known about them other than their appearance and supposed properties if being a melee type mob. It is currently unknown if it will be implemented in the future. 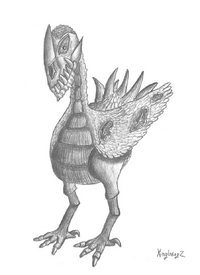 Undead Moas were a planned animal mob for The Aether II and were considered undead equivalents of normal Moas.[8] Not much is known about them other than their appearance and supposed properties similar to Overworld Zombies or Skeletons. It is currently unknown if it will be implemented in the future.

Randomly Generated Trees were a planned feature for The Aether II mod. Trees would be fully randomly-generated, having random leaf color, fruit type, log type, tree length, tree thickness, etc.[9] Players would be about to combine materials obtained from said trees to create their own hybrids and share recipes with other players. Kingbdogz claimed a small test prototype was made and that even so, the resulting combinations were nearly endless.

Altars were intended to have more utility than just their default Enchanting function, where the player could cast spells, and even summon minions, where some of the minions would fight for the player.[10]

It has been mentioned that aunctioning off items would be a future feature, where the player could set a price on an item and sell it to other players, without them having to be present to trade it over to another player.[11]

It has been mentioned that breedable Carrion Sprouts would be planned in the future, and the player would be able to use seeds to plant and grow their own Carrion Sprouts.[12]

Deep Nether was a planned dimension for The Aether II mod, and was likely intended to be an expanded version of The Nether dimension as implied by the name.[13] Not much is known about it other than the hint given by Kingbdogz and it is unknown if the Pyralis concepts by the former Aetherteam member Liberty have any connection with the Deep Nether. It is currently unknown if it will be implemented in the future.

The Moolands were a planned dimension for The Aether I mod, and was intended as an easter egg or gag.[14][15] Instead of using a Bucket of Water to activate an Aether Portal, the player would use a Skyroot Bucket with milk that would create a portal to the Mooland dimension. The Moolands would generate like the Aether, except islands were noticeably flatter, covered in red Grass blocks, and would often stack under each other with several blocks of clearance in between.

Giant Mushrooms that had blue and white spotted caps and white stalks would generate, sometimes with windows and furnishings inside. Multicolored Blue or Yellow cows would spawn, had erratic movements, and bizarre sounding soundbites for noises and would drop Leather and Steak when killed. The Yellow Cows would give off gold particles near them, like Golden Oak Leaves, as well as small, hard to notice Water particles. This was later ported and turned into it's own mod called Moolands, by Kino.

It has been mentioned that rideable Aerwhales were possibly planned, allowing the player to saddle them and fly them around as a means of transportation.[16][17]