The Aether Wiki: Genesis of the Void
Register
Don't have an account?
Sign In
Advertisement
in: Blocks, Stackable, Non-Renewable Resources,
and 4 more

“Found at the edge of islands. Speeds up anything on it. Use it with blue clouds for epicness”
—Book of Lore

Quicksoil is a type of block found in the Aether.

It does not require a shovel to be obtained, and so, will drop even if mined with bare hands, but mining it with a shovel is faster.

Quicksoil can be found naturally generated in small patches on the sides of islands. In 1.10[upcoming], Quicksoil also now generates as coasts covering the fringes of most islands and in 'pools' in mainland.

Quicksoil will majorly increase the movement speed of any players or mobs that walk on it, even more dramatically with additional Speed buffs. While the movement speed increase may be useful, it can be hazardous as players can accidentally fall to their deaths if unaware.

Taming a Swet will further increase the movement speed, if one rides a tamed Swet on Quicksoil.

It can also be enchanted on an Altar or smelted in a Holystone Furnace to be turned into Quicksoil Glass, which currently is the only glass block in the Aether. Quicksoil Glass still retains its special ability (increasing movement speed), but, however, it is not as powerful as Quicksoil. Its overworld counterpart, Sand, can also make glass, but Sand cannot speed players up. 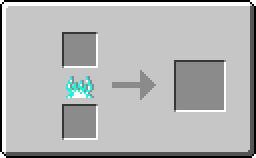 Issues relating to Quicksoil block are maintained on the bug tracker. Report issues for Quicksoil there.

A Quicksoil formation on the side of an island. 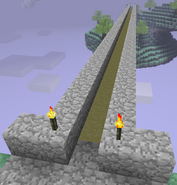