The Aether Wiki: Genesis of the Void
Register
Don't have an account?
Sign In
Advertisement
in: Bronze Dungeon, Mini-Boss, Neutral mobs,
and 7 more

Sentry Guardians are hostile mini-boss mobs found in the Aether.

A Provoked Sentry Guardian that has tried to float away 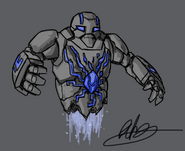