The Aether Wiki: Genesis of the Void
Register
Don't have an account?
Sign In
Advertisement
in: Pages needing revision, Utilities, Blocks,
and 9 more

Skyroot Crafting Tables can be mined with any tool, or with bare hands, but an axe is the fastest.

Right-clicking on a Skyroot Crafting Table placed in a world will open a 3x3 crafting grid, which allows the player to craft items that require a 3x3 grid. It has the same basic function as the normal Crafting Table from the Overworld. An Overworld Crafting Table can also be used in its place, instead.

If a player disconnects, moves more than eight blocks away or closes the interface, the items inside will drop on the ground nearby.

When used as fuel in a Holystone Furnace, a Skyroot Crafting Table lasts 15 seconds or 1.5 items. 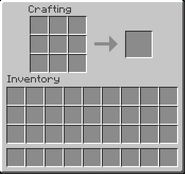 The Crafting Table interface, as viewed on the player inventory
Community content is available under CC-BY-SA unless otherwise noted.
Advertisement