The Aether Wiki: Genesis of the Void
Register
Don't have an account?
Sign In
Advertisement
in: Blocks, Stackable, Non-Renewable Resources,
and 3 more

Slider Labyrinth Totem is a type of block found in the Aether. They function as teleporters to the Slider's Labyrinth.

Slider Labyrinth Totems can be found randomly generated in Dungeon Entrances, which are made out of Divine Carved Stone and Divine Sentry Stone.

A naturally generated Slider Labyrinth Totem in the Aether dimension. 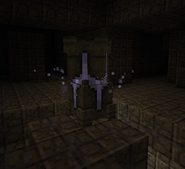 A totem viewed from inside a Slider's Labyrinth.
Community content is available under CC-BY-SA unless otherwise noted.
Advertisement