The Aether Wiki: Genesis of the Void
Register
Don't have an account?
Sign In
Advertisement
in: Mobs, Aether II, Dungeon mobs,
and 5 more

Tracking Golems are hostile mobs found in the Aether. Their eyes and its orb turns red when hostile.

Tracking Golems stalk the player until they are in its range. Accompanied by a ringing sound, the golem will lock the player's reticle onto itself, turn its color to red and inflict Nausea IV and Slowness IV. All three effects last until the golem is defeated or the player moves out of its sight. Tracking Golems will inflict Nausea IV when they die. This can be extremely hazardous if other mobs such as Sentries are nearby. Provided the player is close enough, the golem will charge at them and inflict damage. They have a high amount of health, so a good weapon is recommended. 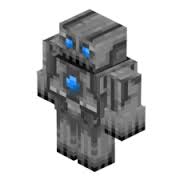 The initial design for the Golems by OscarPayn